The weather was playing crazy when we arrived at Colombo, Sri Lanka. My travel agent had already warned about the landslides and heavy rainfall. But still we proceeded with the trip. Colombo to Dambulla was roughly around 4 hours’ drive. The rain played a spoil sport and extended the driving hours.  By the time we reached Dambulla it was evening. 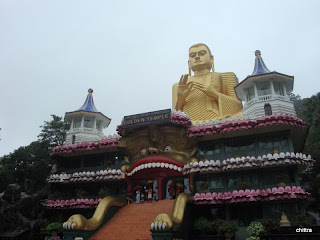 Dambulla is famous for its cave temples. At the foot of the hill is the Golden temple with a huge Buddha statue. You need to walk up few steps to get a closer look of the golden Buddha statue. People offer flowers and pray to Buddha and there were monkeys everywhere to snatch the flowers and eat. They seemed pretty restless and irritated with the rain and dampness. There isn’t much to see with the golden Buddha.. The adjacent steps lead to the cave temple. Now the Golden temple at the foot of the hill is quite deceptive. Not sure if the statue is hiding the hill or we could not get a better view of the hill in the rain. It looks like there is no hill at all but you keep on climbing to reach the caves.

The climb to the hill is through steps cut in the rock, some well laid steps and later the path divides into two, laid steps and sloping pathway. We kept on climbing the hill and soon what seemed as the tallest Buddha statue became small and we were much past the statue. The rain started pouring down! I had to balance an umbrella, hand bag and prevent myself from getting wet. We are not allowed to wear slippers on the hill and the feet were turning cold. Soon we were able to see couple of shops and a security guard and some clearing. We were glad to see the clearing hoping it to be the rock cave temple. But no!! That was not the end. My friend was not well and she gave up the climb. From there the path divided into two, one a sloping path and the other well laid steps. The slope turned steeper and the water was gushing down against me. I had to stride the weather and pushed myself upwards. You need to be prepared for the climb! You think that it is the end but no! The end never really comes until you give up! Because each turn leads to another and another! The evening was setting in and the rain was hard so there was hardly anybody around. Finally I reached the top!


It was now drizzling and the view from top of the hill was breathtaking. There were adjacent small hills and the entire city and distant mountains can be seen from the top. You pass the entrance and it leads to the cave temple which looks more like some lengthy verandah with windows. I gasp at it wondering, ‘Seriously? The entire climb for this?” There were not many people around and one guy approached as a guide. I had read that they ask for lump some money and I avoided the guide. I entered the first cave and man!! There was a huge reclining Buddha statue. People were offering their prayers and so did I. If you think only Monalisa’s painting looks at you wherever you are then look at this Buddha in His eyes! He is very powerful and His eyes caught mine very strongly! I did not want to move out of the cave for a long time. But it was a small one and people were moving in and out and so I had to move out. I reluctantly moved to the next cave and I was stunned! There were Buddha statues everywhere. Statues of various size, standing and sitting. Numerous paintings were on the walls of the cave. It is a UNESCO preserved site. What was intriguing about the place was there were Lord Vishnu’s statues at many places in this cave. What was the link between the Hinduism and Buddhism? There were paintings of Vishnu and statues making me stand in wonder. I was trying to decode the paintings and statues but couldn’t understand much! Anything that is historical always intrigues me for these statues would have seen the world change, the life change in front of them, they are the ones who witness the change and I was keenly looking at them hoping that they would say something. I was never able to see them as mere statues. For sure it was a divine place protected by some divine force! What made them create such beautiful things on top of the hill! The next cave was also similar. With lot of Buddha statues everywhere mysteriously looking at me holding back the secret of history with them. 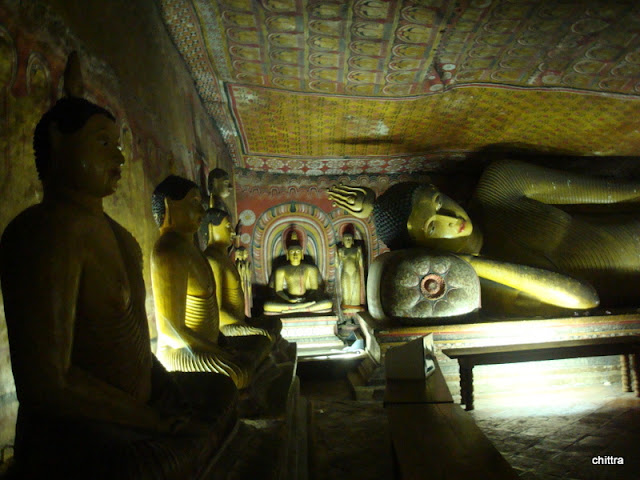 It was getting late and my friend was waiting downstairs so I decided to climb down. I came out of the entrance of the temple and there was a very very pleasant surprise waiting for me! Mist was setting in. It was like walking right into heaven. That was indeed looking like a stairway to heaven! The cloudy mist was hiding my vision almost and I was trying to figure my way out fast. The mist might look beautiful but I was without any protection and I was sure of falling sick if I was standing amongst the mist. But that was the most beautiful and surprising moment!! The rain had again started pouring and I tried my best to keep up the pace and run down but the path was slippery and I slowed down. Soon I joined my friend to tell her loads and loads of stories about the mysterious rock cave temple Dambulla. 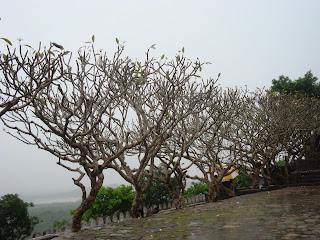 The ticket to the caves is expensive. The climb is tedious but definitely worth it. Take small breaks and soak in the beauty around the hill to give you the energy to move forward. It is a hike, so carry water, rain coats, caps, coolers whichever is appropriate.  You cannot wear slippers so plan accordingly. Midday sun might burn your feet. Photography is allowed but with no flash. Please understand the importance of that! Just because selfishly you want to take good pictures, don’t use flash and harm the paintings. It is a temple, respect that. You cannot take pictures posing with the God!