I was quite surprised to discover the religious side of Hampi. I usually do a bit of googling before visiting a place. But my work was so jam packed that all I did before the trip was to pack my bags. May be that is why there were more surprises than I anticipated. Also I have heard only stories of Vijayanagara ruins and I have never heard of Anegudi. Anegudi is the other side of Thungabadra river. This part of Hampi is believed to be where Kishkinda Kandam of Ramayana took place. I read Ramayana and so I was on cloud nine as I went to each place. Here is the gist of places in Hampi which are religiously important.

Contents - Read all the way though.

The most important hill which is visible from many parts of Hampi is the Anjanadri hills. It is easy to spot with the white stairs spiralling around the hill. There are two ways to reach the hill, take a ferry from the Virupaksha temple and reach this side or take the highways, pass the Thungabadra dam and follow the route to Kishkinda resort. We took the highways because we wanted the car to cover the rest of the places. Once you cross the highway and enter the road to Anjanadri it is beautiful scenic drive with lush paddy fields on either side of the road bordered with boulders. I would recommend to take this ride just to see the beauty of fields with some monkeys hoping around. Well folks told us to do the climb early and catch the sunrise. But this was the third day of Hampi and we were pretty torn already. So climbed it sweating under the hot sun.

Anajandri is where Lord Anjaneya was born or some say His mother Anjana Devi prayed here for a son. Whatever, it is holy place. It has more than 500 steps to climb. And there are monkeys climbing along with you 🙂 But these are good monkeys; unless it is banana or coconut in your hand they do not harm you. I was super scared first as there is space only for one person to climb and there are huge monkeys thumping around. Then I said Jai Anjaneya and proceeded. As you climb up, the steps get steeper. So many North Indian pilgrims were climbing on. We stopped here and there, enjoyed the view of Thungabadra river cutting through Hampi. Well Anjaneya does give you the strength to make it to the small temple on top. There is Hanuman carved on a huge rock and pooja is done in North Indian style. There is a swamiji, a shrine for Rama and a shrine for Anjana Devi. The view from the hilltop is beautiful. Distant paddy fields, river, coconut groves and boulders! So many boulders that I started wondering if the stone for the bridge to Lanka must have been taken from here!! We spent some time feeling the breeze and climbed down.

Our next stop was Pampa Sarovar where Shabari was waiting for Rama to give Darshan. There is also a Lakshmi Temple here where again pooja is done in North Indian style. There is a small cave on the left which is said that Shabari was staying there and a small feet of hers is carved out. To the right is a shrine which has Rama’s feet carved out. Before the temple is a huge tank and lot of big fishes seen swimming in it.

Then again car stopped in front of a small hill and driver said you need to climb up. Though it is a small climb, after Anjandri I really did not feel like lifting my leg at all. Few fleet of stairs and then comes a Hanuman shrine. Then comes the main shrine of Goddess, very pretty idol.

This is another place in relevance to Ramayana. There are numerous shrines here. Hanuman, Shiva, Narasimha, Surya and so on. The main thing here is the cave where Rama used to stay. It is three huge boulders placed in such a way by Hanuman that it forms like a hut. Chintamani means thinking and Lord Rama made his strategic plans thinking here. Also it is from here that Lord Rama shot the arrow at Vaali. A small boy turned guide pointed to the hill on the opposite side and told us that it is the Vaali Sugreeva cave where they fought. Another hillock he pointed at was where Sugreeva’s wife was present. There is an incarnation of Rama’s bow and arrow and Lord Rama’s feet is carved out here. The place is calm with river flowing by and dhobis washing.

Another significant temple after driving down from Chintamani cave. Pooja is done here and it closes by 12pm. It is white washed temple. There is a Ranganathar shrine. And a huge temple car in front of the temple. By the side of the temple is Jain temple and Anegudi map is present. 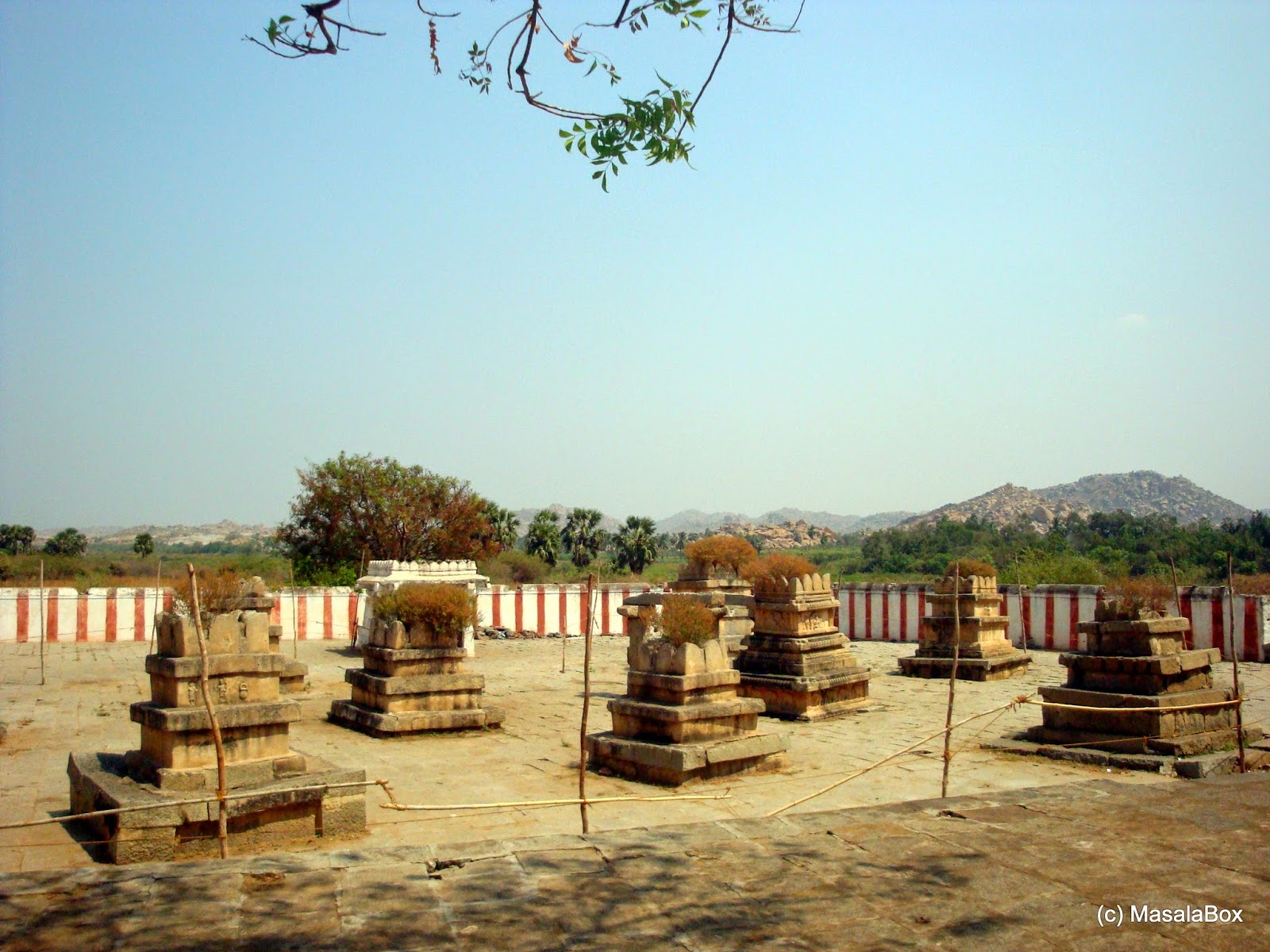 I know some people plan to go here like how they do to Thirupathi and I just bumped into it. Sometimes when you are meant to be somewhere destiny does take you there. Vrindhavan is the place where Madhvacharaya and his disciples attained Jeeva Samadhi over a period of time. Jeeva samadhi is to dedicate yourself to God, so you are buried when you are alive which means the soul reaches God and the body is still here meditating. This also includes disciples of Sri Raghevendra swami. It is quite a wander to think of how over the years one after the other goes to the same island and attains moksha. It is indeed a holy place and it is believed that if you have any horoscope related issues it is a place to wash away your sins. To reach Vrindhavan we were dropped at a place from where boat plies to Vrindhavan. It is one boat that tactically moves through the river I guess during rainy season or when the river sweeps up they might not ply the service. At Vrindhavan is the nine samadhis of the saints with tulasi on top. There is a small shrine for Hanuman and pooja is done. Also are shrines of Vishnu and Navagraham. It was really hot and you cannot wear slippers. The view of Chintamani caves from the boat while returning was beautiful. It was a pleasant sight to see the cows grazing on the islands near by.
WALK THROUGH HAMPI
We covered Anegudi by morning and then crossed the river to continue our walk from Virupaksha temple to Vittala temple. Walk up to the monolithic temple and take a left in front of it. Vehicles cannot ply so do not take auto or any two wheeler. This walk is a very scenic and beautiful stretch as it passes along the river side. In this stretch you can find the Kodanda Rama Swamy temple, Yantrodaraka Anjaneya temple, Ranganatha temple, Achutaraya temple and some more small complexes. I have covered the religious temples below. The walk ends at the king’s balance of Vittala Temple. From there we again took the buggy and reached to the entrance.

This temple is situated on the ruins side of Hampi. There is a walkable stretch from Virupaksha temple to Vittala temple. The first temple to come on the scenic pathway is the Kothanda Rama Swamy temple. I am not sure of the significance of the temple but the Lord is tall and majestic. Above this temple is the Anjaneya temple. 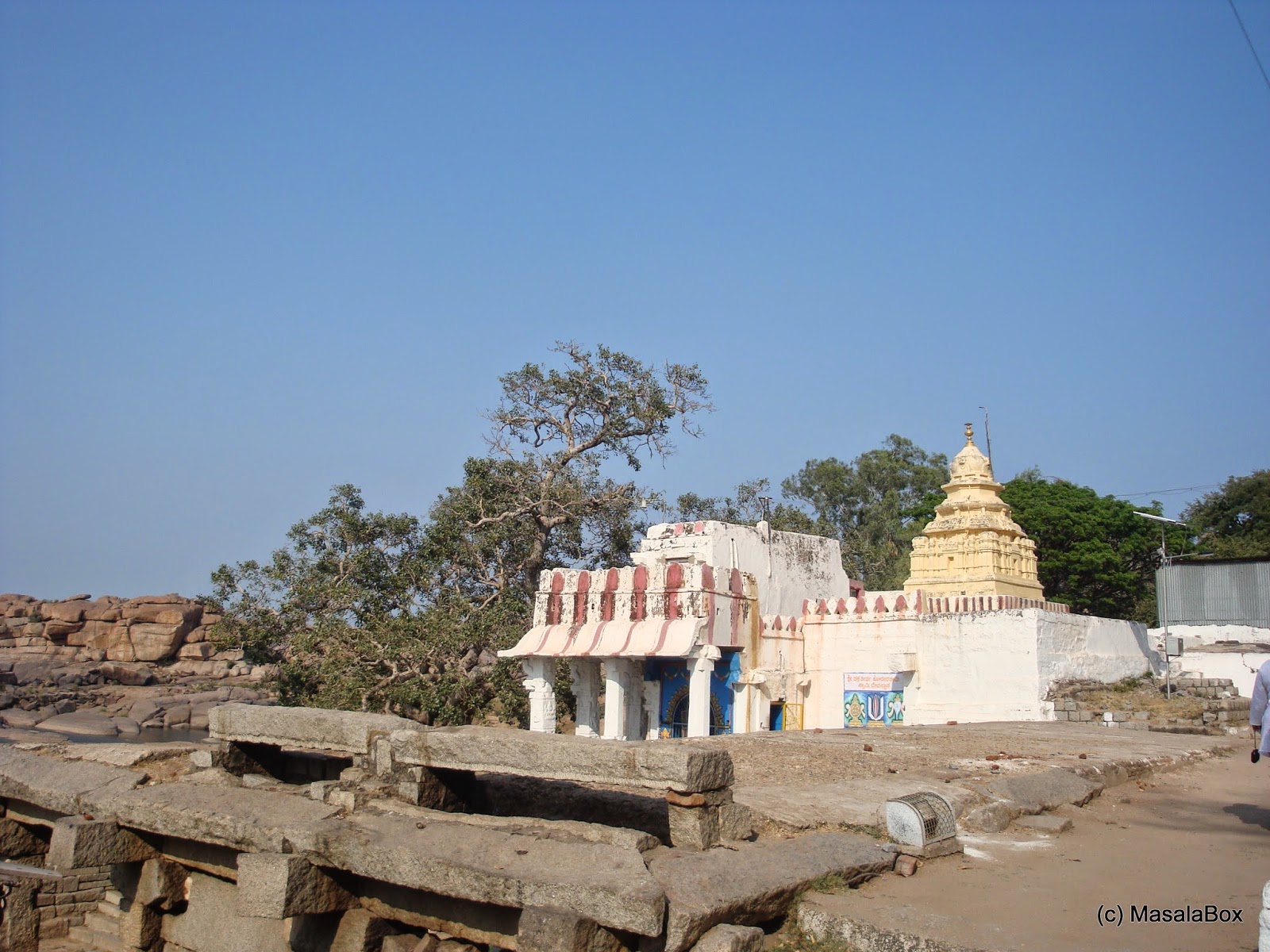 This temple is few flights above the Rama temple. The uniqueness of this temple is Anjaneyar is found seated and in meditating form which we cannot see anywhere else. It is a swayambhu moorthi meaning formed by itself. It is believed that Lord Anjaneya used to meditate here and VyasarRaja used to see this. Once in his dream Hanuman asks him to construct a temple, but then what form Vyasar would give the moorthy as He was sitting in different posture each day. Then Vyasar curtails Anjanyeya while meditating and ties around 12 monkeys together in loop and imprisons Him into it. There is also a yantra around it. It is believed that whatever you wish for here will come true in six months. It was beautiful to see the Lord in a different form and the whole place had divinity to it.

This is near the Vittala temple on ruins side of Hampi. Malyavantha hill has the religiously important Rama temple called Raghunatha temple. In this temple Rama and Lakshamana are seen in sitting posture and They are like saints with curled up hair and beaded garland. There is a Sita devi standing by the side. The priest said this is the temple or the place where Rama is meditating and worried about Sita devi not found. Meanwhile lord Anjaneya is in front of lord showing Him the jewels that were thrown down by Sita Devi.
And of course Virupaksha temple. Apart from the climb of Anjanadri hills the rest of the Anegudi side is purely for the religious and if you are not, you will not be able to appreciate it. Foreigners if you do not know Hindu mythology you will not like the Anegudi side, for there is nothing architectural wonder here as these are white washed temples. However Anegudi is a raw town, untouched by the commercialization of Hampi. I loved having walked through this quaint little town.