Home
India
Travelogue
Share the post with your Friends..
Lepakshi is a small town in Anantpur district, housing the famous Veerabhadra temple. It is ideal for a day outing from Bangalore. We started from Bangalore around 7am and took the Marathahalli -> whitefield -> hoskote -> devanahalli -> chikaballapur -> hindupur route. There wasn’t much traffic being a sunday morning and within an hour’s time we reached NH 4 of Hoskote. After which was perfect highways with smooth roads, vineyards, plot sellers, corn fields and paddy fields. Stopped for breakfast at Kamat on the Bangalore – Hyderabad highway. Reached Hindupur by 10.30am and from there we need to take a deviation and proceed for another half an hour or so. The highway is a treat to ride with smooth long stretches of road and is a treat to watch with bikers racing down the road. One way was close to 145km. That is how I reached Lepakshi from Bangalore, I am more keen writing about the temple than the travel.

Contents - Read all the way though.

The Veerabhadra swamy temple is located on a small hillock which is in the shape of turtle. Very few steps to climb and there starts the history. This is the place where Jatayu’s wings were chopped off by Ravana while abducting Sita. And Rama finds the bird dying and cries out le pakshi le pakshi (get up bird), hence the name Lepakshi. We hired a guide and it proved out to be useful. The Veerabhadra swamy temple was constructed by Virupanna in Vijayanagar architectural style. Here is the tour of the temple.
Long corridors with pillars runs around the temple. These served as guest houses. If you take a close watch at the roof near the pillars, you can see gaps running horizontally in the ceiling. The first row served as curtain rods and the second row was used to hang luggage it seems.  Guest room ready in a minute. To your right you can see inscriptions in Kannada and Sankrit. Also an inscription of Virupanna taking the blessings of God’s feet. 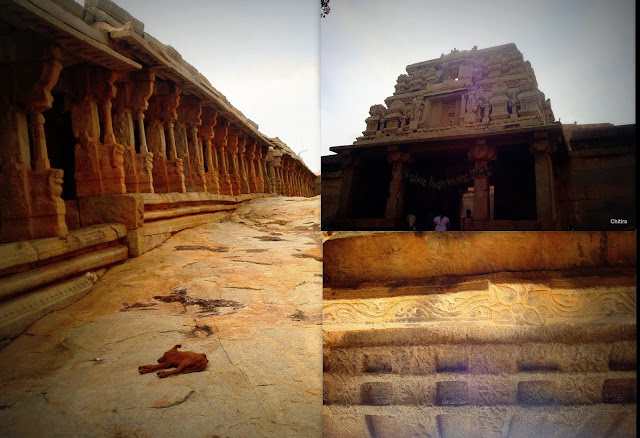 As in any Hindu temple the first prayer is offered to Lord Ganesha and here too you can see a huge idol of Him. Next by the side we can see the story of Sri KaalaHasthi carved out in the rock. Further down is the idol of Saptha Kanikas. 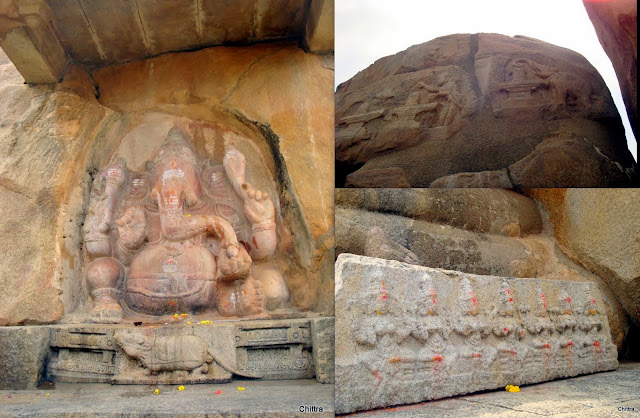 Then you see the first Shiv Linga brightly polished under the seven headed serpent. This is the iconic image of Lepakshi. The story says, there is a kitchen right opposite the Shiv Linga. When the workers arrived the lady had not yet completed the cooking. So she asks them to wait, goes in to finish cooking and when she comes out the monolithic stone has been carved into seven headed serpent coiled around guarding the Shiva Lingam. All in her cooking time! Probably they must have carved the entire temple in a month or so. It is so divine, calm and peaceful to sit there and watch Him. 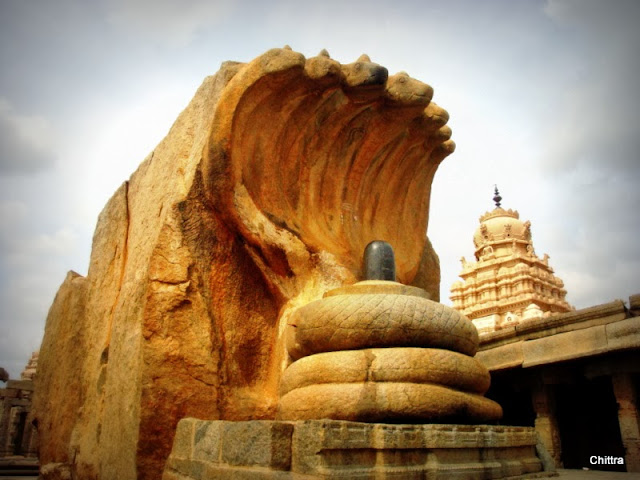 The back of this Shiv Linga is the unfinished Kalyana Mantapa. Just pillars erected with beautiful carvings in it. It is believed that there was a misunderstanding between the King and Virupanna. When the King found his treasury empty and blamed Virupanna for spending out everything on the temple. In ancient days when someone is found the culprit they would be blinded. Virupanna blinded himself by plucking his eyes out and throwing them on the walls. The blood stains are still there. There have been several attempts to remove the stain during renovations and it does not go. Coming to the Kalyana Mantapa, it depicts the marriage of Shiva and Parvati. This can be seen in one of the pillars. The wedding is witnessed by Ashta Dikbalagars, the protectors of the world. You can identify them by the figure on the pillar and the corresponding transport they use below them. Like Indira on elephant, Vayu on deer and so on. Also on the pillars you can see one sculpture depicting different postures. Eg, a three headed cow, when two of the heads are closed it looks like cow is grazing, walking or feeding. Two monkeys when seen in different angles you can make out four monkeys are there. Acrobats performing and so on. 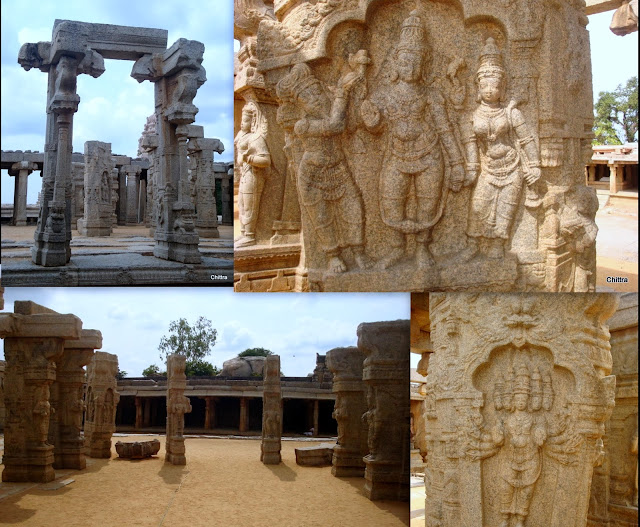 Below the Kalyana Mantapa is the Rudrathandava Shiv Linga, the second one. Side by is a passage which leads to Sita Amman padam. History as said above Ravan was taking Sita away and one of her feet is seen here. Am not sure if the footprint at lepakshi temple is that of Sita devi or that of Ravan, it is huge. We were also told one feet is here and the other feet is 45km away in another hill nearby! It is always wet with water coming from a small hole! Yes, nobody knows the source. Then is the Durga amman peetam but now idol of Hanuman is placed there. You could see huge plates carved out which is used by the workers to eat. Ten different side dishes every day! 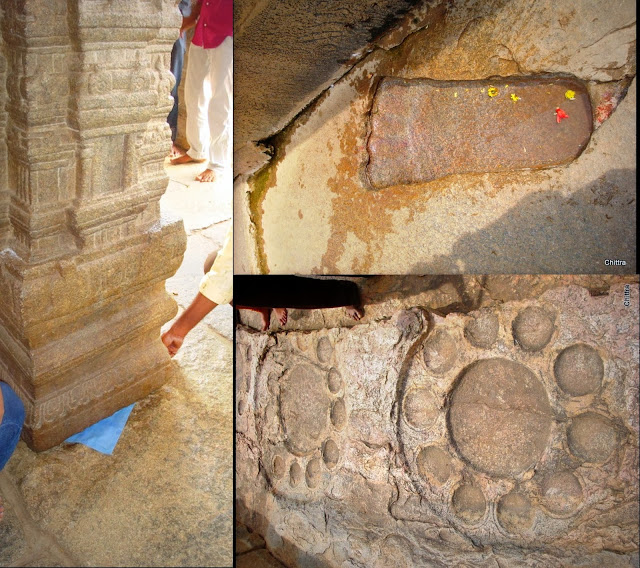 Also seen above is the hanging pillar. Just before you enter the sanctum sanctorum is the dancing hall. The dancing hall has approximately 100 pillars and they are all balanced by this hanging pillar! You can see the gap between the pillar and the floor. Once Britishers tried moving the pillar and one another pillar developed a crack. The dancing hall has Ramba dancing sculpted on a pillar with Brinji (three legged) dance master teaching her to. There is perfect looking man and woman sculpted! And then there is Shiva marrying Parvati depicted again with a nice story. Missed the pic! So Parvathi after self immolating herself in the yagna conducted by Daksha, is born again in earth and she is praying for Shiva to marry Her. Shiva comes in the form of poor man and asks alms. While she is filling the pot in His head, the naughty Shiva pulls down Her skirt. But Parvathi knows how to treat someone who has come asking for alms so She does not stop giving food. Shiva gets pleased and shows His true avatar. One of the best sculptures. 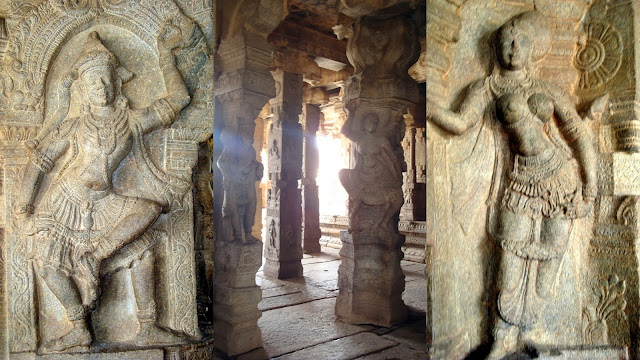 The roof of this dancing hall has murals depicting different story. There is story of Gokarna, a wedding procession, a hunting episode, story of Manuneedhi cholan and the figurines of Virupanna with his brothers. Also there is a aaliyellai Krishna smiling at you. 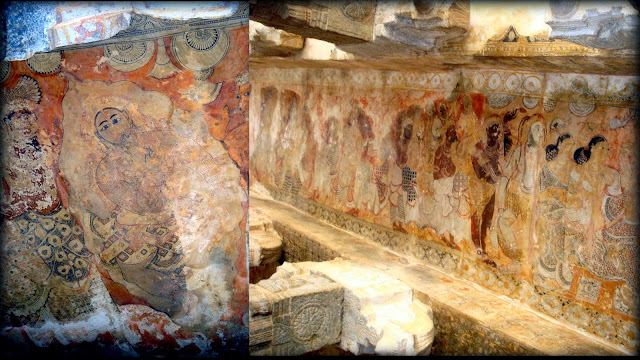 The sanctum sanctorum has the statue of Veerabhadra. The moment you enter, left there is Shiva and right opposite is Vishnu’s shrine. In this temple it is to be observed that Shiva and Vishnu are one and the same. That is the third Shiva! Next is a small dark cave where sage Agastaya meditated. Next is the shrine of Parvathy. Next is the Rama Lingam, the fourth one. This was installed by Lord Rama and He prayed it. Next is Hanumantha Lingam, the fifth one, installed by Lord Hanuman. Next is the shrine of Bhadrakaali, consort of Veerbhadran. And the statue of Mahishashura Mardini. In the center is the shrine of Veerabhadra.
PHOTOGRAPHY NOT ALLOWED INSIDE

That is pretty much about Lepakshi. Not to forget the Lepakshi Basavana, the biggest monolithic Nandi in India. It is on the way to the temple. Nandi is facing the Veerabhadra temple and it is said that if we see from there we can see the temple. Probably earlier days everything would have been within temple complex. 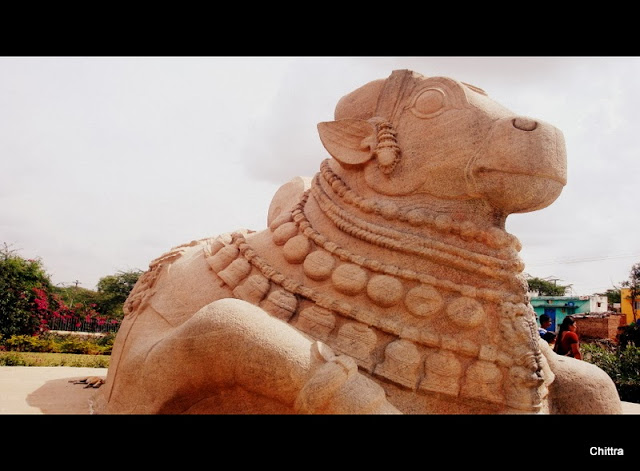 Coming back to the travel part. We had lunch at Lepakshi town itself. And then we went shopping in Lepakshi hunting for handloom sarees and Lepakshi handicrafts. The Lepakshi Kalamkari designs are very famous. These are the ones drawn with pen on cotton sarees and in the inspiration for the design comes from the Lepakshi temple pillars. Most of the shops were closed on Sunday. Not really sure worth hunting down for the sarees. Until you know some genuine shops or references, it is advisable not to.
The drive back was smooth again and we reached by 6pm. Few things to note. This is a pancha Linga shetram (five Shiva Lingam). It is a fully functional temple, respect the sanctity of the place. Photography is not allowed inside the sanctum sanctorum. Events sculpted out are history, God is not, do not do anything that violates norms of the temple. Dress appropriately and you cannot wear footwear.
Enjoy Travelling 🙂